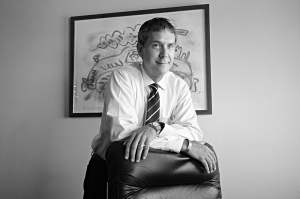 Ron Kaye specializes in holding law enforcement, prosecutors and prison officials accountable. As an experienced trial lawyer representing plaintiffs in federal civil rights actions, and defendants in both state and federal criminal proceedings, he has achieved outstanding results for his clients.

Recently named one of the top 100 attorneys in California by the Los Angeles Daily Journal – his third time receiving that honor – Mr. Kaye is renowned for challenging and prevailing over government officials who have violated the rights of his clients. He has successfully received substantial damage awards for plaintiffs in cases involving: wrongful imprisonment; inadequate medical and mental health care in custodial facilities; and excessive force. He also has successfully represented the full spectrum of individual clients in criminal proceedings, including: white collar fraud; government misappropriation; intellectual property / Internet crimes; espionage / immigration related offenses; and sale of controlled substances.

Mr. Kaye is a graduate of UCLA Law School and has a Masters Degree from UCLA School of Urban Planning. He has taught criminal law at UCLA and in a seminar for members of the judiciary of the Kingdom of Bhutan. He also led a delegation of attorneys investigating the murder of Jesuit priests in El Salvador. Before forming KMBL Law, Mr. Kaye was a trial lawyer in the Office of the Federal Public Defender for eight years and was an associate at Heller, Ehrman, White & McAuliffe—where he was on the Christopher Commission, investigating the corrupt practices of the LAPD.

In 2010, Mr. Kaye was named one of the California Attorneys of the Year by the California Lawyer magazine for representing an individual who was wrongfully imprisoned for 24 years. Mr. Kaye also recently was featured in Southern California Super Lawyer Magazine and Los Angeles Magazine, and profiled as an alumni in UCLA Law Magazine. In 2015, Mr. Kaye received the ACLU of Southern California’s Prisoner’s Rights Award, and in 2016 he received the Johnnie Cochran Award from the Criminal Courts Bar Association of Los Angeles.

Francisco Carrillo, Jr. v. County of Los Angeles, CV 11-10310-SVW(AGRx) – Lead counsel representing plaintiff who was wrongfully imprisoned after 20 years in prison from the age of 16. Five years of litigation uncovered the unconstitutional conduct of the lead defendant, a Sheriff’s deputy and  a member of the internal law-enforcement gang the “Lynwood Vikings,” who manipulated of a 15 year old witness to select plaintiff as the shooter in a 1991 drive-by shooting. Plaintiff’s legal team demonstrated the corrupt police practices of the deputy and those within his unit which resulted in the misrepresentation of evidence to District Attorney, the court and the jury.  The case settled for $10.1 million.

Rodriguez v. County of Los Angeles, et al. CV 10-6342-CBM(AJWx) – Lead counsel in five week trial representing five plaintiff inmates against 28 deputy sheriffs. Inmates were systematically beaten during a cell extraction after protesting conditions at Los Angeles County Men’s Central Jail. Jury returned unanimous verdict of civil rights violations triggering $710,000 in damages, and $240,000 in punitive damages despite defendants admitting evidence that plaintiffs were “the worst of the worst” inmates at Men’s Central Jail, and that they had been breaking sinks and throwing pieces of porcelain at defendant deputies. After prevailing at trial, the district court awarded KMBL and co-counsel $5.4 million in attorney fees based on difficulty of the litigation and the challenge of representing convicted inmates against law enforcement in a jail conflict.

Thomas Lee Goldstein v. City of Long Beach and County of Los Angeles, et al. CV 04-9692-AHM(Ex) – Co-lead counsel representing plaintiff who was wrongfully imprisoned for 24 years. Six years of litigation reflecting failure to disclose exculpatory evidence by detectives and the failure to create a system to disseminate exculpatory evidence by the prosecution. Case required two appearances before the Ninth Circuit Court of Appeals, one before the U.S. Supreme Court and one before the California Supreme Court. Case settled $7.95 million with City of Long Beach and $900,000 with the County of Los Angeles.

Losorelli v. County of Los Angeles, CV14-05062-R(SH) – Lead counsel representing the parents of the decedent who committed suicide at Men’s Central Jail. Plaintiffs claimed flagrant deliberate indifference by both the Sheriff’s Department and the Department of Mental Health, and their respective employees in the care and treatment of decedent. The case settled for $1.6 Million, and triggered substantial policy changes in the protection of those inmates suffering from mental illness who are in custody in the County of Los Angeles jails.

Smith v. City of Placentia, et al. CV 06-0097-GW(ANx).  Plaintiffs sued the City of Placentia on behalf of his son for shooting an unarmed man who was high on methamphetamine, had written a suicide note and was charging the officers.  Although the decedent was aggressive, officers were impeached by demonstrating that they were not following their training when dealing with a psychologically troubled individual.  Settled for $500,000.00.

Loberg v. County of Los Angeles, CV16-06190-RAO – Lead counsel representing the daughters of the decedent who committed suicide at Twin Towers facility in LA County Jail. Plaintiffs claimed flagrant deliberate indifference by both the Sheriff’s Department and the Department of Mental Health, and their respective employees in the care and treatment of decedent. The case settled for $1.7 Million, and triggered substantial policy changes in the protection of those inmates suffering from mental illness who are in custody in the County of Los Angeles jails, e.g., housing in higher observation mental health monitoring facilities.

City of Bell Prosecution: Misappropriation of Government Funds: Represented council member of the City of Bell for charges reflecting misappropriation of government funds. After five week trial and one month of deliberation, jury returned an acquittal on one quarter of counts, hung on one half of counts, and guilt on one quarter of counts. At sentencing, Council member received a sentencing of probation, community service and no custodial time – the only defendant to receive a non-custodial sentence in the case.

Counterfeit Software Prosecution:  Client was convicted of distributing counterfeit software represented by another attorney, and our office substitutes in. Files habeas petition and vacates prior conviction based on ineffective assistance of counsel.  Client goes to trial and receives an acquittal on all counts.

Gang Prosecution: Client is charged with felon in possession of a firearm.  The case is the first “Mongols” prosecution set up by the federal government in Los Angeles.  All evidence reflecting “Mongols” is excluded from trial and the client is acquitted after one hour of deliberation.

Insurance Fraud Prosecution: Client is charged with being the leader of an insurance fraud conspiracy: falsifying claims against an insurance company.  Three co-defendants testify against the client.  All three were fully impeached.  Full acquittal on all counts.

Distribution of Methamphetamine Prosecution: Client is prosecuted for selling methamphetamine.  Client has a prior and is facing a mandatory 20 years.  KMBL investigates the case, and finds out that the Drug Enforcement Agency and the informant who worked the deal is using another informant not disclosed to the defense.  The court dismisses based on outrageous government conduct.

Medical Marijuana Prosecution: Client is the leader of the medical marijuana movement in Southern California and one of the creators of the Compassionate Use Act.   Prosecutor threatens for 20 years.   At sentencing, prosecutor argues for 3 years in prison, client gets full probation.