Former Bell Mayor George Cole, sentenced Wednesday to home confinement for his role in the small city’s corruption case, said after the verdict that is filled with shame and remorse for the scandal.

A onetime steelworker and the son of a Presbyterian minister, Cole was ordered to sentenced to 180 days of home confinement and five years of probation. He was also ordered to perform 1,000 hours of community service and pay back $77,000 to the working-class city that was pushed to the edge of bankruptcy by fiscal wrongdoing.

“There’s no way to express the shame, the remorse,” Cole told Superior Court Judge Kathleen Kennedy, who has presided over the Bell trials.

Cole had built a reputation as a community leader who embraced Bell’s shift from a white, middle class city to a town dominated by immigrants.

“George Cole is a Latino leader even though he is not Latino,” Supervisor Gloria Molina once said.

But Kennedy said Cole rewrote his legacy by drawing an oversized salary for serving on boards and commissions that seldom, if ever, met. Four other former council members also were convicted and pleaded no contest to identical charges.

“Mr. Cole has done a lot of good things for a lot of people,” the judge said. “Unfortunately, his legacy really has been tarnished and this is what he probably will be remembered for.”

Deputy Dist. Atty. Sean Hassett, who had asked that Cole be sentenced to four years in prison, put it in harsher terms: “He betrayed the people of Bell.”

Cole, who served as both a mayor and council member in Bell, was one of eight people arrested in 2010 after the enormous salaries and financial irregularities were exposed.

One of the council members, a preacher in the community, was found not guilty but the others were all convicted.

Cole is the second to be sentenced. Former Councilman George Mirabel was sentenced this month to one year in county jail, though his attorney predicted he would only serve days behind bars.

Thus far, Kennedy has reserved her toughest sentences for the administrators who ran Bell. Robert Rizzo, the domineering city manager, and his second-in-command, Angela Spaccia, each was sentenced to 12 years in prison. 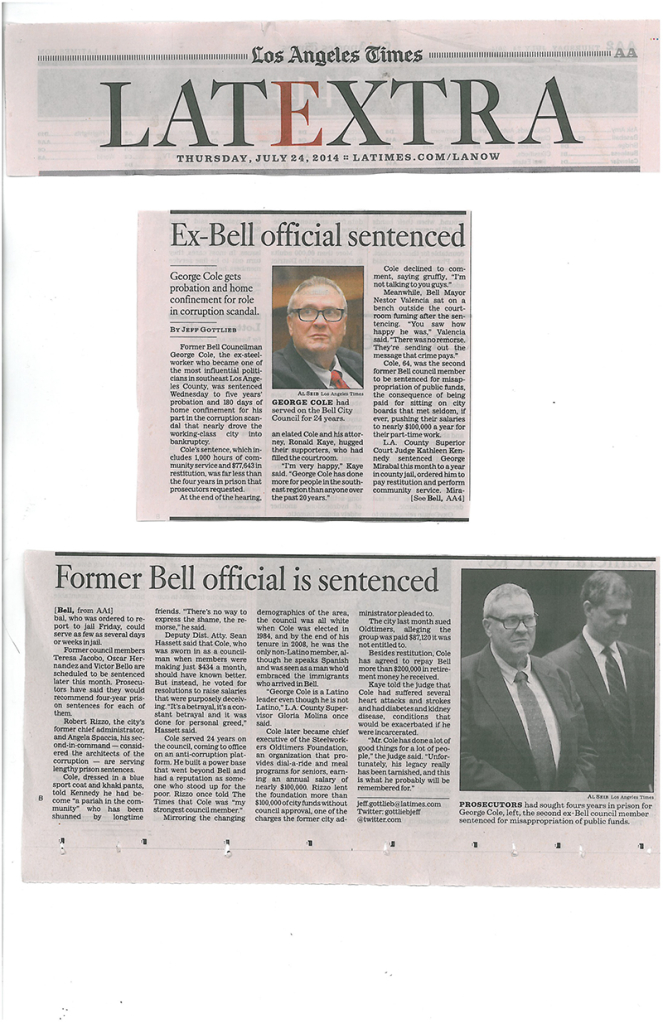 Shortly before I moved on after 28 years of work as a Federal Public Defender, one of the younger attorneys I had the honor to mentor forwarded me an e-mail he’d received from an Assistant United States Attorney. The e-mail complained that my younger colleague was being extremely frustrating, that my colleague was making far too much of a “simple little case,” that the client in the case was going to be deported no matter what, and that my colleague was forcing the prosecutor to “expend a tremendous amount of effort” on what the prosecutor characterized as a “silly issue.” He ended his e-mail by asking, “Have you been hanging out with Carl Gunn?”

Some people would have been insulted by this, but I felt rather proud. Making as much as we can out of what the government sees as “simple little cases,” litigating issues despite the government’s view that they might be “silly,” and “expend[ing] a tremendous amount of effort” on behalf of clients who have the full weight of the government thrown up against them – often with the government’s view that the case is open and shut, or “simple” – is our calling as public defenders and defense attorneys. We all have our different reasons for doing it, but it’s a crucial task – for our clients, our system, and ourselves. As Sir Thomas More was said to say in “A Man for All Seasons” in response to his future son-in- law’s exclamation that he’d “cut down every law in England” to get at the devil: “Oh, and when the last law in England was down and the Devil turned round on you – where would you hide, Roper, all the laws being flat?”

I’m proud if “hanging out with Carl Gunn” means not just accepting the government’s view that cases are “simple” and “little,” that issues are “silly,” and that we shouldn’t expend resources on our clients. Hence the name of this blog: “Hanging out with Carl Gunn.” I hope to offer some thoughts and ideas that the government may think are “silly,” but I respectfully don’t; that you can use in cases that the government may think are “simple,” but aren’t so simple when looked at more critically; and that are an entirely appropriate way to expend our resources. And in the spirit of this being a “hanging out” together, there might be guest bloggers from time to time with their “silly” ideas to offer. I hope you find some of the ideas on this blog helpful and offer whatever comments you might have to add to them.

"These cases do not constitute a guarantee, warranty, or prediction regarding the outcome of your legal matter."