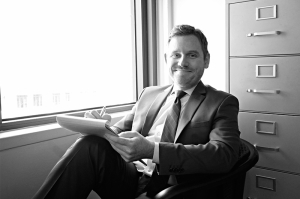 Mr. LaHue is highly experienced in all aspects of criminal proceedings from arrest to appeal in both state and federal court.  Through zealous advocacy he routinely obtains exceptional results for his criminal clients.

Mr. LaHue received his undergraduate education at the University of California at Berkeley earning a double major in Legal Studies and Philosophy.  He then attended Loyola Law School in Los Angeles where he received the Fritz Burns Scholarship awarded annually to the most outstanding entering student.  While at Loyola he also received AmJur Awards for obtaining the highest grade in courses as diverse as Criminal Law Motions Practice and Art in the Law.

Mr. LaHue was selected as a “Super Lawyer Rising Star” 2013-2018.  In 2016 he received the Johnnie Cochran Award from the Criminal Courts Bar Association of Los Angeles.

Mr. LaHue was an invited participant along with former Chief Justice of the Ninth Circuit Kozinski in a St. John’s Law School panel discussion regarding the search and seizure of laptop computers at international airports.

Attempt to meet undercover agent pretending to be 14 years old via Craigslist and possession of child pornography Pomona, CA. Negotiated disposition with no time in custody.

DMV Hearing for Second Time DUI (while on probation for first DUI) with BAC of .22 Pasadena, CA. Won DMV hearing by establishing deficiencies in necessary paperwork allowing client to keep his driver’s license.

Illicit Sexual Conduct with Minors in Cambodia. Co-counsel where client was charged in United States District Court with illicit sexual conduct with minors in Cambodia, i.e., Vietnamese child prostitutes. After filing a motion reflecting the federal agent engaged in overly suggestive photo identification of client with minors, and taking multiple depositions in Cambodia of character witnesses and primary government witness, the government offered a deal of three years in custody, as opposed to twenty year sentence.

Driving Under the Influence of Alcohol and Marijuana (wax) Glendale, CA. Negotiated disposition of reckless driving and probation.

Possession of Child Pornography at LAX Airport. Co-counsel where successfully litigated suppression of evidence in United State District Court based on 4th Amendment right to privacy in the contents of laptop computer traveling through international customs.

Frank Lucero v. Dr. Hoan Nguyen, et al., CV 09-2151-GAF(AGRx). Co-counsel in case against the California Department of Corrections for failing to provide medical care. Inmate, who was blind in one eye and failed to receive necessary glaucoma treatment, resulting in the rupture of eyeball. Case settled for $585,000.

Smith v. City of Placentia, et al. CV 06-0097-GW(ANx). Co-counsel in case against the City of Placentia on behalf of son for shooting an unarmed man who was high on methamphetamine, had written a suicide note and was charging the officers.  Although the decedent was aggressive, officers were impeached by demonstrating that they were not following their training when dealing with a psychologically troubled individual.  Settled for $500,000.00